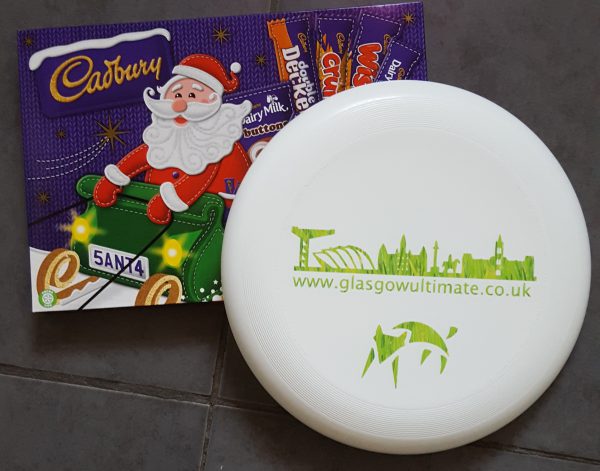 Perhaps in future years the English/Welsh/Irish will try to challenge its festive might, but for now Christmas Cone reigns supreme. The recent venue change and expansion to 24 teams has been well received by all, and firmly cements it as the premiere Christmas-themed tournament in the UK.  Well done to Dark Horses for putting on a quality event and you can check out photos from the day on their page.

We kicked off this project by challenging people to pick the top 8 positions at Christmas Cone 2017. We can now reveal that the leading analyst of themed mixed indoor hat teams in Scottish ultimate is of course Andrew Warnock. The current Strathclyde captain has clearly been keeping files on all of you, for which he wins the disc and selection box pictured above.

We also asked who would be the “Most Merry” at the party. There were several contenders but nobody emerged as a clear favourite. Does this mean standards have slipped, or that everyone has stepped up their game and it is currently a very competitive category? Can anyone confirm whether James Bogie, T, or Ben “sleep-dancing” Cornelius lived up to their reputations? Did someone else emerge to be crowned life, soul, and liver of the party?