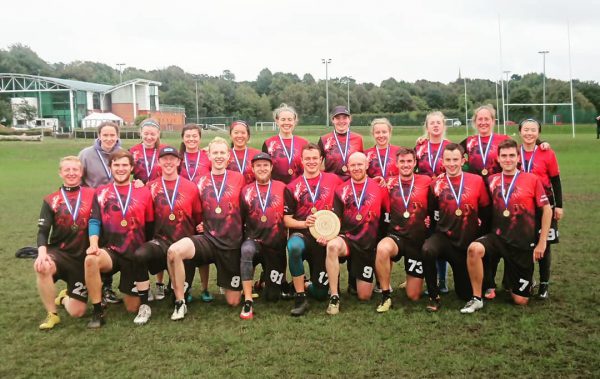 3 out of 4 of the UK’s mixed bids at WUCC 2018 came from our north region last year. In the mixed division over the last couple of seasons, Black Eagles, SMOG and Glasgow have been consistently competing at the top of UK tour, Nationals and – well, for the most part – in the top half of the world.

With this strong interest and performance, it was a shock when UKU made the announcement: “Unfortunately, the MIXED NORTH event has had to be CANCELLED. Due to only 3 teams entering into this division, with 4 qualification spots available, it is not feasible for this tournament to go ahead. As such, ALL 3 teams that entered into Mixed North will be awarded a place at UKU Nationals.”

The mixed division is something that often makes ultimate look exciting to the outsiders, and the scene was also attractive within the ultimate community. Particularly for women in the north and in Scotland, mixed has been an opportunity to develop and compete at an elite level over the last couple of years since, aside from Swift, there lacks any real competition at a regional level in the women’s division at this end of the country.

So why did this year’s north regionals end up as such a non-event? In the run-up to WUCC the high-end focus up north has been almost exclusively mixed. Having presumably peaked to compete against the best at WUCC, you would only assume that the momentum these clubs have built would carry them forward into the next season, to continue to make Mixed Nationals a competitive event, and to represent at Euros later in the year. It would appear that this is the case for Black Eagles and Glasgow. But for SMOG and Reading – the top team in the South region – the opposite. We asked ourselves: What will this mean for the future of the mixed division? It was a particularly interesting question ahead of Nationals last weekend: would the tournament be less competitive this year?

Well, yes – the decisions of these clubs has meant exactly that, and now with the aid of Captain Hindsight, Mixed Nationals actually was a bit of a joke event. Where the depth of the open division was evident, upsets were rife and games were competitive. The women’s division seemed to run to plan with Bristol dominating, but otherwise development of women’s ultimate shining through. But the mixed division fell flat. Other than Deep Space beating Black Eagles and confusing the schedule, the division was a bore draw. Glasgow smashed their pool, conceding less than 10 points on Saturday. As predicted, with no offense to the Southern teams that qualified, they were no match for teams from previous years, let alone the WUCC teams present at Nationals. Black Eagles beat Glasgow in the semi final, where the two best teams faced off. The winner of that game was almost guaranteed to win the tournament – Black Eagles topped the final 15-5, Glasgow won the 3v4 15-12 whilst seemingly playing in second gear.

Will mixed see a revival in the near future or have the single gender divisions caught the attentions of the best players and biggest clubs? Hopefully we can see some quality and depth added to the division, as clubs are having their annual meetings soon and deciding on the direction they will all take. However in the meantime it seems that the open and women’s divisions may be picking up some of the best talent from the mixed side, so we will see what that means for teams next year.

What will this mean for the future of the mixed division now that we know what happened at Nationals? Are there other teams that will rise out of the woodwork now that SMOG and Reading are out of the picture? Will these large community clubs such as Glasgow, SMOG and Reading attempt to field teams in all divisions (a sight rarely seen in the UK, if ever)?
It would be interesting to know what you all think as readers. What would you like to see happen? Do you have any preferences on division and why? What do you think of the change in momentum around Nationals?