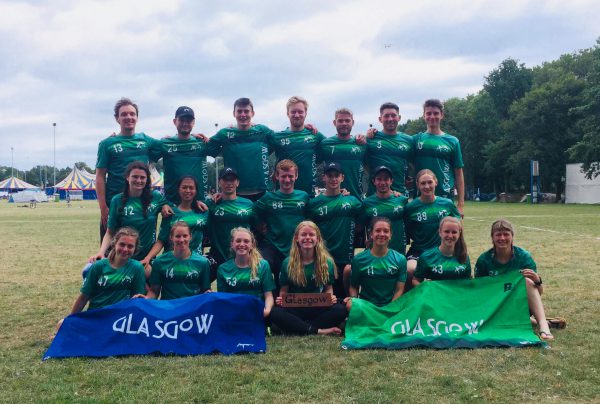 We interview the Glasgow Ultimate mixed team going to the World Ultimate Club Championships in Cincinnati.

Two lovebirds who met in Stirling but went searching for pastures greener arrived in Glasgow to play at, in their words, ‘the best club team ever’. See how they are feeling ahead of World’s and who they want to smash when they get there.

Ben and Rory play in completely different roles but click on the pitch as well as off it. See what they have to say ahead of the tournament and have a giggle alongside them.

Katie started playing when she was 12 years of age, so has a lot of experience to help the team at this tournament. She also has a famous family, with her sister working as a well known youtuber, her dad also starring heavily in those videos, an Olympian for a mother and a budding singer as her youngest sister. Katie will hopefully get to show the world that she has the same talent to shine on the world stage.

WUCC 2018 is looking for a love story better than Twilight and we would like to cast this man for the male role. He is the GUX team sweet heart. Loved by all, including the defender he is about to roast. Catch him scoring some points and making his lover’s cry.

Toilet Tait is the team’s tall guy. His job is to clean up swill from the opposition and from his own throwers. An upfield reset option is needed in every good offense. Ian enjoys scoring, skying and measuring up against the world’s best. Catch him in the USA testing the best receivers in the world.

Harriet is known for two things. Her love of her guinea pigs and the pelvic rainbow. Interested? So where we and we loved the move so much that we decided to bring it to you. Hopefully we will see it after every assist she throws state side.

Introducing another one of the foreigners on the team, meet Audrey. Playful, tall, charming and she has an undiagnosed case of scoring goals. Look out for her deep strikes in the US. In the meantime, get to know her a little bit better.

Captain, leader, ginger. Iain has led the team with top organisation this year and it’s been showing in the team’s preparation. A squirrely offensive line player who can’t wait to show the world what he can do, his hips will come into full use on the field, as they do in this video.

These two may have been selected for their ultimate abilities, or the fact that El Capitan was gaining votes by recruiting gingers. The team will never know, but they have been bringing a lot to the table, they are athletes, dancers and music producers. This pair are trying to bring pain to the opposition by providing blocks on the field. Get to meet them here!

These guys are the Spirit Captains of the Glasgow team. Some people associate spirited players with just being super fun. These two don’t know what fun is. They are to the point, they struggle to make us laugh, but at least we got to know them… sort of. The team should be down to earth, straight to the point and know their hand signals. See them floss at the end I guess…

This person does not love the camera. In fact all they love is winning, oh and puppies and smores. We couldn’t ascertain who they were, but if you have any guesses, put them in the comments for some brownie points. They seem excited to meet teams who are as unknown as them. Seems to be a running theme, they like surprises.

Sam and Kat are stalwarts for the team in their young club careers, Sam developing with Glasgow last year and Kat being a new addition this time around. Both can be relied on to grind down, do a job and carry the expectations of the team. See em in Cinci making some mad grabs and pulling the team through, bringing the attitude of the team up.

Shaun is one of the founders of Glasgow Ultimate and part of the Webb brothers pairing who remain iconic within and outwidth of Glasgow. A staple on the o line on this years team, he will provide a lot of wits and experience to the team, as well as a lot of leadership and grit.

Phil, another legend of the club. The older Webb, another founder, ever-present player and top guy. Looking to lead the D line to a top performance, watch him sky some guy who is annoying him and then acting dad to his team mates. In this video you can find out a bit about him. Yes, he is naked.