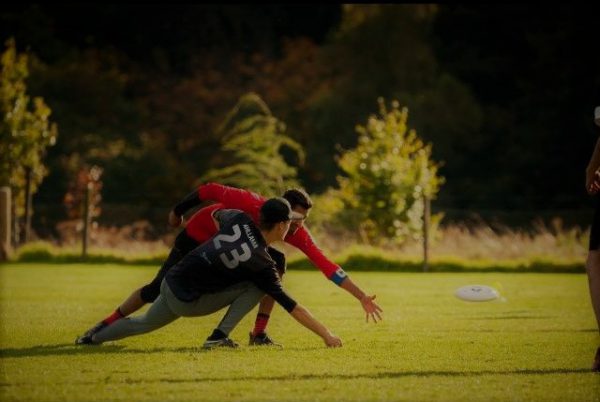 When and why did you start playing ultimate?
Autumn 2013. I went to Glasgow University and got handed a million flyers at freshers week as everyone does. I got coaxed to going to a social where someone immediately faced me with a three pint challenge. After that I thought that crowd was pretty awesome so I went to Tune Up, after that tournament I was hooked

Give us some points about your playing style and things that are crucial to your game.
I think something I’ve always found interesting in Ultimate is how you can be the best team possible. Many teams achieve it in many different ways but mostly it’s down to how you use your possession of the disc

That translates into my game where I’m a reliable player who mostly takes the right option for the team and rarely make mistakes. I’m not always super exciting to watch but I do like to bash out some overheads.

I think I have a very level head and a calming influence on a line, plus a healthy amount of lankiness that help my play style a lot. Maybe I’ll learn to bang it more soon…

Who are your biggest influences in Scottish ultimate?
The Super Webb Bros. They are two tiny foreign guys who wear matching wetsuits to tournaments. They got me playing the sport, were my first coaches who have developed my game endlessly and continue to do so today. I’m surprised they stuck with me to be honest cos I’m a pain in the ass.

What are your best memories from throughout your time playing ultimate?
I’m lucky enough to have played with an amazing bunch of people for the last four years. Most of my experiences have been shared with Duncan and/or Katie, so anytime I’ve one upped them is always nice. Duncan footblocked a player at regionals. I footblocked the same player and caught it for a Callahan. Being taller than Katie, you get the gist.

But seriously throwing a huck in a mixed tour final as a second year player for an assist against the tournament favourites, followed by one of the Webb’s running on and screaming at me to never do that again, while I beamed at him and laughed. Yeah, we won the game

What are you most excited about going to worlds?
For Worlds I am most excited about playing with an amazing bunch of guys. It’s so different to the teams I’ve been on previously and we have an awesome energy that I want to enjoy for the week. We have a great squad full of potential and I’m excited to go and fulfil our expectations. Hopefully we can end the season with a bang, playing in the big games.

What is your favourite Aussie animal?
The wombat. What a ridiculous animal

What advice would you give to someone thinking about trialling for GB in the future?
If you are thinking of trialling for GB or if you think you shouldn’t go, just do it. What is the worst that can happen? You have a great experience, meet some incredible and fun players and don’t make it? If you don’t go you are missing out on a great event. I got rejected on the previous cycle but came back for more cos it was a blast. Know what your strengths are, play to them and have a ball. If you are nervous it will only affect you negatively. Be confident in being the best you can be and boss it.