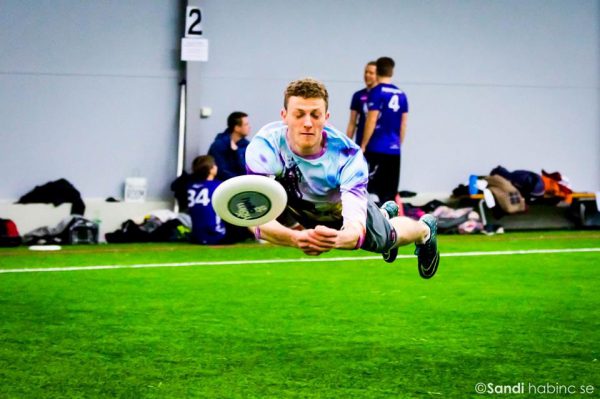 When and why did you start playing ultimate?

There were a few people in my school who played and I thought they were pretty cool, but never had the guts to join them. So come uni I thought I would give it a try, along with every other club at uni, but I went along to nothing. In second year I signed up for one thing and that turned out to be frisbee and I’ve played ever since that September in 2012.

Give us some points about your playing style and things that are crucial to your game.

I like to think I’m a D-line player through and through but that’s mainly because I’m not very good at offence… When I am playing O it’s all about keeping the disc and keeping it moving. The other team can’t score if you have the disc!

But back to defence, where my heart is. It just about being super tight. Shut your player down. If everyone on the pitch does that then you are golden!

Who are your biggest influences in Scottish ultimate?

What are your best memories from throughout your time playing ultimate?

It’s a tough one. Breaking my thumb getting a first pass layout D off my own pull was quite nice, the party at HelloStockholm that one year, shouting at the Clapham regionals team from this year to get their fingers out, but I think the best moment would have to be only getting one stat from a full competitive club season!

What are you most excited about going to worlds?

Getting to play against the best people in our age group and seeing how I stack up. Got the USA first so that’s prime time to find out!

What is your favourite Aussie animal?

Crush, the turtle from Finding Nemo.

What advice would you give to someone thinking about trialling for GB in the future?

Just go for it. It’s a bit weird at first, nobody knows how to act, so it is up to you to make it fun in the beginning, then it all works itself out.