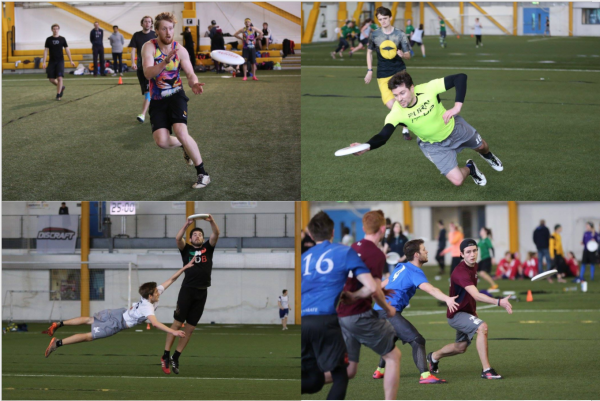 Shaun Webb gives us a run down of the competition at Scottish club open indoor regionals this weekend.

Ravenscraig will host the Scottish instalment of UK club open indoor regionals this weekend, a qualifier for the UK National indoor championship, with the top 4 teams progressing towards that event. In reality, few, if any, of the qualified teams will venture south for Nationals, so this is more about Scottish/Northern English pride. The format is simple: 16 teams split into 4 groups, a 5-12 crossover, a knockout bracket from the quarter final stage and a 4v5 playoff game. Traditionally there are only 2 or 3 title contenders at this tournament but the seedings and draw this year throw up some interesting match ups. Let’s take a look through the pools.

Rampant go into the tournament as first seeds following their second place finish at Nationals (held at Ravenscraig) last year. However, injuries and absentees mean this is a very different group to the team that earned that silver medal. The garish uniforms remain unchanged, as too their dynamic, occasionally undefendable, style of offense and a late injury call on Mark Simpson will boost their chances. Though they still have the talent and experience to comfortably progress from this group they will find a few big tests in the knockout stages ahead. Merseyside Ultimate Club are second seeds in this pool, 7th overall, and will provide the biggest competition for Rampant in the opening stages. MUC are a club on the rise, placing emphasis on development over the past few seasons and there is no shortage of talent in the Merseyside area. There is potential for them to do some damage here but we’ll have to wait to see what sort of team they send North. Two university second teams, Stratchlyde (Dark Horses) and Dundee, complete the pool and will be expected to remain in the bottom two slots. Recent form suggests that Horses will prevail here, they have consistently had the best performing second team in university competition this season, even taking some first team scalps. They’ll be hoping to challenge MUC; home advantage and the local support could make this an interesting match.

If you want a bit of excitement at the start of the day pool B is where it’s at. BDB are the tournament 2nd seeds but probably the real favourites with the bookies. Although they have lost the talismanic presence of Andrew Dick, their line remains star studded with some of Scotland’s top talent (Agnew, Easton, Boxall..) at the peak of their careers. They trust their aerial ability and a switch to a 3-2 offense has allowed them to exploit the strength of their athletic cutters. Confident handlers that back their receivers and a daunting D-line means this is a fun team to watch and a very difficult team to beat. Standing in their way are the two local university teams, Dark Horses and Glasgow. These are two of the best student teams in the UK just now, both hitting peak form in the run up to university nationals. The rivalry is hotter than ever, having already duelled in several epic matches so far this season. Both teams will make life difficult for BDB but will realistically be challenging each other for second place. A sneak preview of Farflung’s roster indicates that they won’t be at full strength, so I expect Horses to edge it on this occasion. Stirling Blaze 2 round off the group and will find it difficult to get going in such a challenging pool. If they hang in there and absorb a few lessons they could be ready to take some scalps later in the day. Teams progressing from this group will have played several good games to work their way into the tournament, opposition beware!

Lizards have apparently migrated from the utopian paradise of Frizzbizzle Forest to take root in Bruntsfield. Perhaps tasting indoor defeat for the first time in 2017 prompted this relocation in an effort to rediscover top form. Danny Hoyle and James Glover lead the Edinburgh based Lizards of Bruntsfield into the tournament as 3rd seeds and are definite title contenders, having held this trophy several times before. Their old guard are skilful, athletic and experienced, while their young guns are skilful, athletic and slightly less experienced. With a playing style as bold as their colour choice and few weaknesses throughout their squad, opposition will have to wear this team down if they hope to find any success. There should be an interesting tussle for second place in this group. The Brown have been making the trip to Scottish regionals for several years now and are always there or thereabouts with a reliable, well oiled brand of indoors. They will contend with Sneeekys, another well drilled outfit that know the game inside out. Both teams have developed the finely tuned skills required for indoors but have fallen short in the athletic department in the past. The victor will find it tough to compete with the best teams but should be pushing for a top 8 spot overall. Dark Horses 3 are the only third team in the tournament and are unlikely to do much damage here. The real battle will come in the latter stages where they should find their level amongst the bottom 8.

This is another exciting pool with some well matched teams. Dundee are the tournament 4th seeds but recent form suggests that will be difficult for them to maintain. They have struggled to impact on the university scene so far this season and it looks as though the dynasty may finally be at an end. There is still undeniable talent, Angus Milliken and Jimmy Dimitrov for a start, and their physical, throw caution to the wind style can go either way for them. They will contend with rivals Stirling Blaze, who seem to be travelling on an opposite trajectory to their university chums, for the top spot in this group. If Fraser McDonald plays it will help Blaze’s fortunes but the combination of Finlay Watson and Ryan Hill still provides a legitimate threat. Sneeekys and The Brown battle it out again in pool D, this time with their second teams. The Brown 2 have been given a generous seeding of 6th due to a last minute drop out but I don’t think anyone expects them to hold this, especially if they have drafted a team together at late notice. Sneeekys 2 should be competent due to the regularity of their training sessions but I doubt they will have the firepower to challenge for the top of the pool. There should be some really tight games in this group with with a lot on the line. The crossovers are treacherous for all but first place and it will be difficult to see any teams from this group make the semi finals via the back door.

I expect BDB to have a comfortable ride to the semi-finals before meeting Lizards. This game could go either way but I think BDB have more options to fall back on in tight games. I’m predicting Dark Horses to knock out Rampant in the quarter finals, I think they’ll be better prepared going into that game having played an extra match and encountered tough opposition in their pool. Horses should then have a comparatively easier semi on that side of the draw but I think they’ll likely succumb to BDB again in the final. 4th place is difficult to predict, with the draw the way it is it’s likely to be a club team like the Brown or Sneeekys or even an inspired Stirling Blaze or Dundee who are the other semi final team. However, I think Rampant will rise through the ranks to take the final qualifying spot in the 4v5 playoff. Farflung should finish comfortably inside the top 8 wishing the draw had worked more in their favour. In the lower half expect to see Dark Horses 2 winning the battle of the second and third teams in some close fought matches.

Take a look at our preview for ScCWIN and keep an eye out for post-tournament coverage!