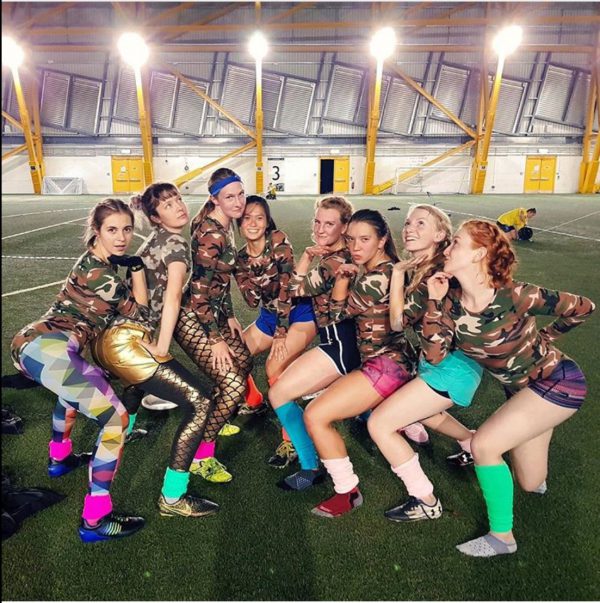 The female side of the draw is less fixture dense than the men’s with 2 straightforward pools of 4 advancing to a quarter final bracket. Every team will be buoyed to see the absence of Amazons who have dominated this tournament of late, meaning we will have a new Scottish women’s indoor champion. It’s a real east vs west battle this year with only one team (St Andrews) hailing from outwith Scotland’s two biggest cities. Let’s have a look at the pools.

An amalgamation of uni graduates, Sneeeky’s stalwarts and soon to be Scrammers, Edinburgh Ladies Frisbee head up pool J as the in form team, having recently tasted victory at Glasgow One Day. Melina Koschnitzki’s movement and Kat Gregory’s huge grab were the difference makers on that occasion, sealing a sudden death win against cross country rivals SLUT. The rest of the team are similarly strong and possess plenty of Frisbee wiles, but it will be difficult to back up their recent success if their star players don’t show up. They’ll face a strong challenge from Strathclyde to top their pool but should make the semis either way.

Dark Horses are dominating the university scene this season with a women’s regionals victory and a UK gold medal in the mixed division already in the bag. While other uni teams have struggled to hit the same level as last year, the Strathclyde girls have reinforced and improved, despite the graduation of some star players. They lost heavily to Amazons in the final last year, but will feel it is their right to succeed the throne and go one better this time around. Their team is well balanced with the height and leadership of Karina Aitken, the devastating speed of Hayley Dalmon, and the weird sausage obsession of Zsofi Marozsak. With university Nationals only a week away they should be in peak form, and this will be a good indication of their prospects to win another gold.

Another university team, the Flatballers have struggled for success in the women’s division for several years but seem to be taking a positive turn. A wealth of talented beginners and some promising results in the uni division has marked this team as “one for the future”. However, Captain Ella Hamilton-Foad, recently selected for GB u24, is definitely a present threat and a strong performance from her could drag this team up a few spots. This tournament probably comes too early in the development cycle for them to make a serious impact, but they should take 3rd place in this pool and end up in a very interesting quarter final with a chance of squeezing through to the semis.

Don’t expect an easy win against Edinburgh 2 just because they’re a second team. The Edinburgh women’s team have always been known for their depth, leading to widespread success indoors and outdoors across recent seasons. With so many Scottish university teams qualifying for Nationals it means that even the second string sides have been training with a focus and this team will be as well prepared as their firsts. They will struggle in a tough group but will look to take some scalps throughout the day and succeed in the battle of the second teams.

After an agonising loss in the aforementioned G1D final, the Scottish Ladies Ultimate Team are out for revenge. Perhaps it was nerves, being so close to their first win, perhaps the tightness of their lycra shut down circulation late in the game. Whatever the cause, they’ll have learned their lesson against ELF and will be itching for a rematch. Despite the universal name, this team has its roots in Glasgow and combines some of the best club players and recent uni graduates around. Harriet Hopper will direct play as a handler while Audrey Melancon-Fournier dominates in the endzone. We expect them to easily top the group, but they’ll face stern competition regardless of their semi final opponent. Success could depend on whether alumni players such as Kim Marsh and Ruth Tayler travel hundreds of miles through icy climes just to play a few games of indoor Frisbee (probably). If not I’m Shaw they’ll find a decent pick up or two.

Glasgow are in the midst of a rebuild having lost a host of long term stars in the recent round of graduation. They are also without world’s player Jae Sng, who is in Singapore playing with pets, so it’s time for the next generation to step up. Nicole Wang and captain Eliza Paynel lead the charge, taking on lead roles with growing confidence, while Suzanne Slob is looking to make an impact having recently arrived from the Netherlands. Farflung are similarly building towards Nationals and we should expect a much improved performance from their faring at university regionals. The big match for them is a showdown against Edinburgh, with the winner claiming the best opportunity to advance to semis.

The Ro Sham girls have probably suffered the most from the decimation of graduation and will find it extremely difficult to retain their double UK university championship this year. Regardless, they still pose a valid threat and finished above both Glasgow and Saint Andrews at university regionals. They will therefore be looking to finish top 2 in the group and stand a good chance of winning their quarter final as well. Summer signing Kirsten Black leads the renaissance with her energy and deft handling skills.

ELF 2 represent the biggest unknown in this tournament. Given their status as bottom seed and second team we might expect them to crash out bottom of the group and wind up challenging for the wooden spoon. However, The talent pool of the Edinburgh club scene is deep and there may be enough experience on this team to outfox the university sides with less big game experience. This is truly a “depends who shows up” team, where one player might make all the difference.